StypeKit is a bolt-on, mechanical camera tracking system for various industry-standard camera crane brands. It can currently track the following crane brands: Stanton Jimmy Jib, Cammate, MovieBird, Technocrane, Technojib, JitaCam, Egripment, Scorpio, Strada Crane, Remote Concept and our own stYpe HumanCrane.
The StypeKit consists of sensors which are mounted on the crane itself, and no external sensors, markers or reference points are needed in the environment.

StypeKit is designed in such a way that no physical modifications are needed to the crane. The system simply bolts onto some key points of cranes. This means fast setup times and also makes the StypeKit suitable for tracking rented cranes. As it is bolt-on, you can use it on different cranes within the same day. StypeKit is very portable and all the components fit in a carry-on plane luggage!

Top-level broadcasters such as the BBC, Fox Sports, MTV, and many others are using StypeKit on a daily basis to achieve Virtual, Augmented, Mixed and Extended Reality effects in their shows.

StypeKit works with all rendering engines currently available on the market, including Vizrt, Avid, ZeroDensity, Pixotope, Wasp3D, RT software, BrainStorm, XPression, Chyron Hego, Pixotope, Disguise, Notch, Aximmetry and others.
All stYpe camera tracking solutions (StypeKit, RedSpy, Spyder) take advantage of the powerful, proprietary lens calibration approach that set a new standard of quality and precision, letting clients focus on the creative aspects of their project, knowing the technical side is handled by our systems. The lens calibration is done within the StypeKit console.

An additional interesting feature of the StypeKit is the automatic aiming and focusing (targeting) feature which allows the crane operator to let go off the joystick and just swing the crane arm, while the StypeKit will be automatically controlling the crane head.
All these features make StypeKit a robust camera tracking solution: it’s easy to set up and gives highest level camera tracking results, which is why it’s trusted by the top broadcasters around the world.

The StypeKit integrates into your production pipeline intuitively and fast as the learning curve is easy. The goal behind all stYpe systems is to take the stress away from the client and give you more time to work on the creative process and other elements of your job. Let’s go through the advantages of using the StypeKit:

*If a crane is on rails, additional time is needed to level the rails properly

We encode the camera crane movement by placing StypeKit’s sensors on all pivot points of the crane. Sensors collect X, Y and Z movement along with Pan, Tilt, Roll, Zoom, Focus and Travel on Dolly. This positional data is then processed and sent to the render engine for compositing the real footage with virtual graphics – in real time. 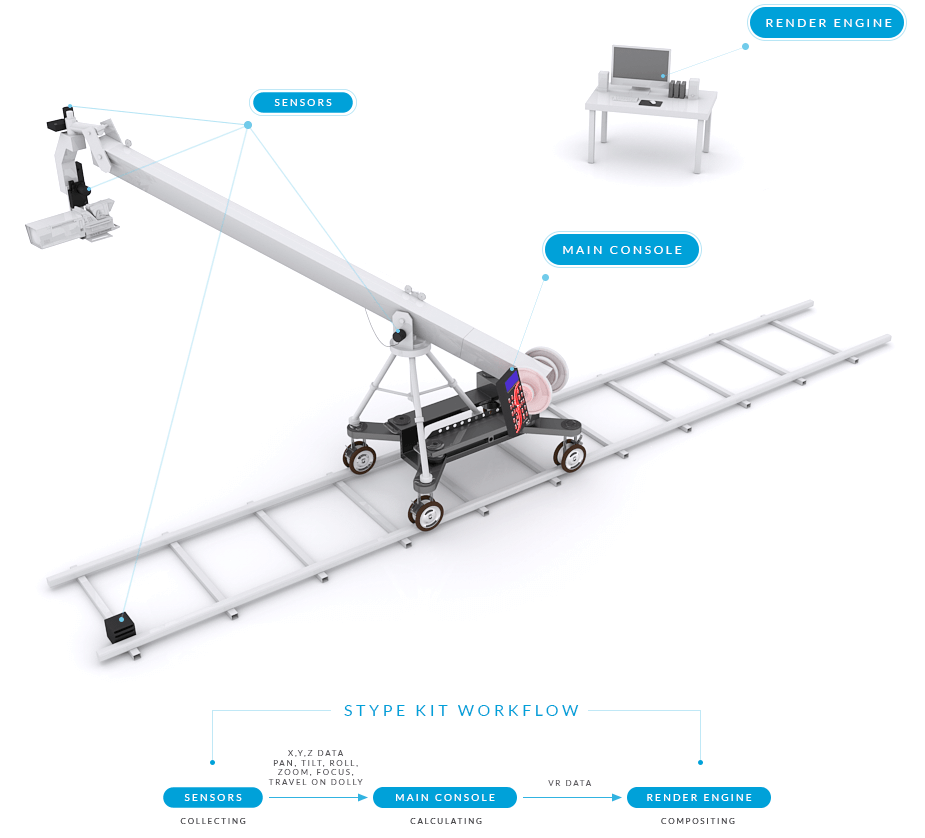 Technical specifications at a glance

Fox Sports, the BBC, MTV and many others recognise the StypeKit for its precision and stability. Find out who else is using the StypeKit through StypeKit global community page.

We are here to make cutting-edge products for film&television industry, continuously revolutionize the motion picture industry and have fun ourselves doing so!